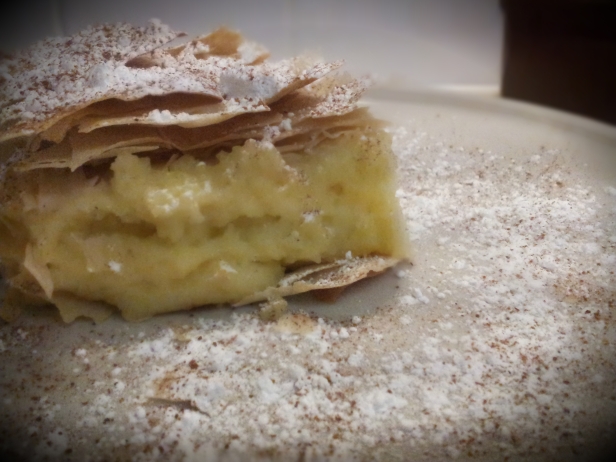 Mpougatsa is one of the most famous Greek breakfast pastries in Northern Greece. It comes with different fillings creme, cheese, meat, spinach. It has somewhat made its way to the Southern parts of Greece but the Southerners don’t seem to understand how it is different to their ‘normal’ and ‘usual’ cheese pastries.

‘History claims that ancients Greeks used to make pies with every kind of fealing called “placountas”. Years went by and mpougatsa stayed popular in Constantinoupolis and Smyrna. Mpougatsa in Turkish means pie fealed with cream and topped with sugar powder and cinnamon powder. After the destroyal of Smyrna and the exchange of the Greek-Turkish colonies, mpougatsa became extremely popular in north Greece and especially Thessaloniki.’ http://www.squidoo.com/mpougatsa-and-how-to-make-it
It’s one of my favorite morning treats and because I have missed it I decided to make myself! I added a special ingredient I adore to the recipe. Mastic ‘spice’ http://en.wikipedia.org/wiki/Mastic_(plant_resin)

Unfortunately I don’t think it can be found in any store outside Greece or Turkey.

It is very easy to make and I would encourage you all to try baking it!

In a 34-36 cm long baking tray we layer 9 filos spreading a bit of butter in between. We make sure the filo runs outside the baking tray. We add the creme and we fold the parts of the filo outside the edges of the tray inwards so that they cover the creme. The point is to make sure the creme is safely contained in the filo so it doesn’t run outside while baking. We cover with the rest of the filo pastry the same way spreading small quantities of butter in between.

We serve dusting with icing sugar and cinnamon.

basic recipe as seen in http://tokouzinakitispareas.blogspot.co.uk/2012/01/blog-post_12.html

5 thoughts on “Mpougatsa Thessalonikis With Creme”